Get fresh music recommendations delivered to your inbox every Friday.
We've updated our Terms of Use. You can review the changes here.

Sessions: Live from the Shamrock Run and the Rock n' Roll B&B 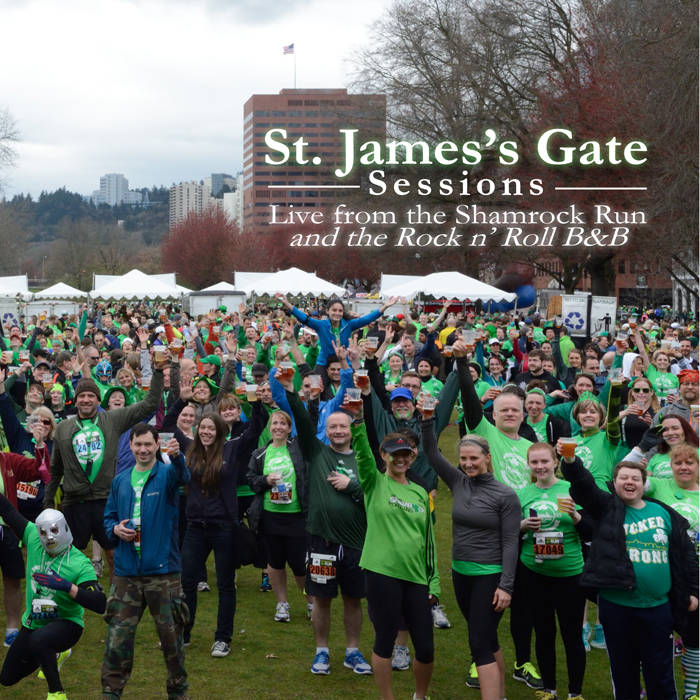 The Sessions album is the fourth release by St. James's Gate, based in Portland, OR. The band is known by so many from the numerous live performances held all over the Northwest. This particular concert held over the St. Patrick's season in 2014 represents a great overview of the wide diversity of musical offerings this group of musicians can provide. As a quintet in this combination, the sound is both full and dynamically diverse - adding lap-steel guitar to the blazing fiddle work, soaring vocals, guitar and a dead-solid rhythm section. St. James's Gate flexes through a broad array of styles, songs and emotions with this release, and shows why the band, now in its 15th year, still continue to headline concerts and festivals that demand quality musicianship, high-energy and fun.

The 2014 Shamrock Run registered over 35,000 participants for a day of fitness and of course beer at the finish line held at the Tom McCall Waterfront Park, in downtown Portland, OR. The band had played a raging private party the night before (the infamous Paddy Gras) and was up early to perform again. Did I mention it was early??? After shaking off the cobwebs, the band quickly hit a stride and these magical performances were captured by Mike Fisher (live sound) and Michael Hudson (live recording) and then mixed, mastered and engineered by Portland's own Sean Flora. We are very happy with these results and know you will be too.

Speaking of Sean, he owns and operates a studio called the Rock n Roll B&B on Sauvie Island just outside of Portland. As the project was forming and the Irish holidays were coming to a close, the band booked a day at this fantastic space, and was able to capture and track a number of studio recordings in addition to these live cuts. The results are absolutely fantastic. Mixing from originals to traditional work, the studio efforts compliment the live performance giving the listener a full overview of the skills and artistry of all the musicians involved. Working with Sean in this idyllic setting, the band was able to build upon these initial efforts to create a number of memorable takes that showcase the depth of the groups talents. Sean was able to capture great performances from all of the band members - all in a relaxed and supportive environment. His outstanding mixing ability really speaks for itself, bringing out the very best in all of the songs - staying true to the performances and to the intention of the musicians.

St. James’s Gate has many strengths, but none more so than the teamwork of all of its musicians – each bringing their own unique talents to the fore – especially in performance. Singer and guitarist Cronin Tierney provides not only some stunning vocal performances both live and in studio, but solid guitar work and some exciting originals as well. The lead track, You and Me, showcases Cronin's outstanding songwriting skill, and a real knack for a hook. Fiddler, mandolinist, vocalist and tambourine madman, Griff Bear shows his diversity as an overall accomplished musician but also as an outstanding soloist and arranger. Griff is consistently a focal point for the audience with his passionate performances and joy in the sharing of his gifts. Joining the group most recently is Dylan Thomas-Vance, providing thoughtful and engaging lap-steel and guitar skills, as well as his vocal prowess on songs like the Irish mouthful; the Rocky Road to Dublin. Dylan's ability to merge from a variety of styles and complimentary solo work against the fiddle provide a uniquely "American Irish" sound to the band that whips crowds into a frenzy. Holding the fort is Dennis Elmer on the drums. Dennis provides a steady clock to a wide variety of styles, often ranging in different meters, jigs, reels or straight-up rock n’ roll. Loved by vocalists and musicians alike, Dennis is a steady constant whose experience shows in his percussive choices that both support and compliment the songs. The driving force and producer of the album is Matthew Rotchford, performing on both electric and acoustic basses, vocals and serving as the band's resident cat-herder. Matthew's comfort between numerous styles like the soulful Into the Mystic or his original composition Liam's Jig, show throughout the recordings whether within the studio or in live performance. Matthew joyfully holds the reigns with Dennis as the StJG rhythm section supports these artists in making the songs the absolute very best they can be. St. James's Gate is a fun band to play in and it shows.

How fitting that this latest St. James's Gate album is called Sessions as a session in the Irish tradition is a most joyful occasion. It is one usually spent amongst friends both old and new, one where dancing and drinking are encouraged, and one where at times the music can touch your heart or even make you cry. St. James's Gate provides that here - a session to which all are invited - an insight to their craft and to the joy and the heartache that these musicians share through their musicianship. By the end of these Sessions, you have made some new friends and we hope, we have made a meaningful connection with our listeners. By capturing the joy of live performance at the Shamrock Run and the focused work of the studio efforts at the Rock n' Roll B&B, St. James's Gate has provided you with over 17 tracks of pure joy. So please, join us dear friends, join us for these Sessions and Ride On.

Produced by Matthew P. Rotchford.
Mixed, Mastered and Engineered by Sean Flora at the Rock n’ Roll B&B. “Wake up where you record…” www.seanflora.com

St. James’s Gate wishes to thank the Shamrock Run and all their sponsors, organizer Desiree Hamilton and her event team, Jalene Brooks and KINKFM, Music Millenium, Sean Flora, Michael Hudson, Mike Fisher, Honey Pie for backing vocals on Rocky Road to Dublin. A huge thank you to our families, children and loved ones both far and near, friends and musical partners. Thank you to all of the fans, pubs, venues, resorts and festivals that have supported this band over these 15 years - a special shout out to the staff, crew and friends at Biddy McGraw's Irish Pub, Nana's Irish Pub, The Columbia Broil (Railside), County Cork Public House, Kells Irish Pubs in PDX/SEA, Galway Bay Irish Pub, the Sunriver Resort and the Bandon Dunes Golf Resort.

Bandcamp Daily  your guide to the world of Bandcamp

Quelle Chris joins the show to discuss his most recent release, "DEATHFAME"